Did you ever find, that playing a guitar solo is difficult and complicated for you? In our minds, guitarists, who play awesome solos are like humanoids with octopus-hands? You would like to be able to play guitar solos as cool as they do, but you don’t know, where to start?

Some time ago I felt the same way too, and a lot of guitarists, who come to my guitar class never played a solo before have a lot of difficulties with mastering it.

As I noticed, difficulties are mostly the same. You can have troubles with hand position or isolating unwanted noises, or synchronization etc. which won’t let you play fast solos straight and accurate. I see a lot in my lessons, that that is often not the biggest problem, sometimes people, who never played a solo, just don’t know, what fingerings are more proper to use to make it go fast and smooth, and not vice versa. 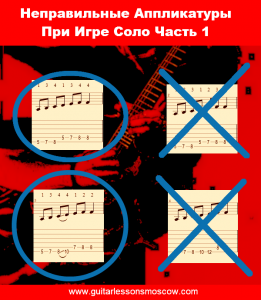 So, if you will use proper fingerings, or change them in proper ways, you will have these advantages:

1. You will need much less tension to play fast

2. You will hit right frets more accurately and your fingers won’t “mess up on speed”

3. You will be able to change positions better, without playing wrong notes

5. Learning new solos will take much less time, because you will practice in the right way

In this series of articles I would like to show you, which fingerings are more, and which are less effective in different situations and why.

As you may notice, first and second fingerings are the same, except the fingers

you use (numbers above).

The problem, that i see very often in my classes, is that people learn music with tablatures like this, and don’t think about things like this, and so, they use weird tablatures, because on the internet, fingers numbering is often missing.

ne finger, or two, and then two other with hand shift. Tablatures like this are all over the internet and a lot of beginners, who learns to play a fast solo, just can’t play it, because it is physically very hard.

Don’t forget also about phrasing techniques. In this case it is a slide from 8th to 10th fret 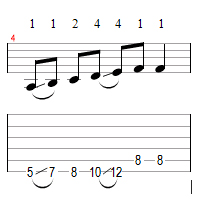 1. Learning music with tablatures limits you as a musician

2. You should always keep in mind, which fingerings you can use for one musical part, which of them are more comfortable, which will help you to create unusual sound

3. The knowledge of different musical scales can help you to use different fingerings more confidently in performing the same musical part

The discussion will continue in the next article.

Pasha Bocharov is professional guitar player and guitar teacher in Moscow. If you want to learn how to play guitar in Moscow check out his teaching studio.